Have you ever had a drug test come back a false positive? How can this happen? It is interesting to point out that sometimes, though infrequently, an initial screening drugs tests may result in false positive results. However, a confirmatory (GC-MS) testing greatly lessens the chances of a false positive, reducing the risk to close to zero.

So what can the person providing the sample do to prevent a false positive?

The first step is to provide an accurate history of all prescription, over-the-counter (OTC), and herbal drug use prior to the time of the sample collection. Certain substances, OTC, or prescription drugs may result in false positives due to cross-reactivity with other substances, although many assays have been reformulated to avoid these possibilities.

For example, poppy seeds and dextromethorphan have been reported to lead to a false positive result for opiates, and decongestants (ephedrine) have been implicated in causing false positives for amphetamines. The body metabolizes codeine to morphine and both substances may be found upon testing.

On the other hand, if benzoylecgonine, the main metabolite of cocaine is detected, the subject cannot claim that the result is a false positive due to Novocaine administration, or any other "-caine" drug.

Benzoylecgonine is only found in nature as a metabolite of cocaine, and there would no other valid reason for it to be present in a drug screen. As previously mentioned, confirmatory testing with GC-MS will identify individual drugs or metabolites in a sample, and almost eliminate the chance for a false positive result.

In other situations, you may receive a result of a false negative. This usually means that there was, or could have been, deliberate adulteration of the drug test sample.

For example, the lab may find a low creatinine lab value. There are two reasons for this. Either the person providing the sample diluted their urine by consuming excessive water just prior to testing, or water was added to the urine sample.

Creatinine levels are often used in conjunction with specific gravity to determine if samples have been diluted. To help avoid this problem, the collection site or on-site collector may color the toilet water blue to prevent the sample being diluted with water from the toilet.

Subjects may also attempt to add certain enzymes to the urine sample to affect stability, but this often changes the pH, which is also tested.

A popular argument today, with recreational marijuana on the rise, is that inhalation of "passive" smoke from being in a room with people smoking marijuana can cause a positive test result. This argument is not valid because the cut-off concentrations for lab analysis are set well above that which might occur for passive inhalation.

All of these variables, and others, are looked at in the lab analysis, keeping one step ahead of those that attempt to foil drug tests.

Remember, in some labs, patients who receive a positive result may have the option to pay for an independent re-test of the urine sample that was originally submitted. A new urine sample is not allowed for the re-test as the drug in question may be out of the system by that time. 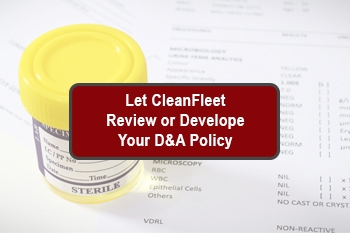 A company’s drug and alcohol policy should be fair and reasonable, clearly stated, fully explained and understood across the company, and compliant with local, state, and federal law in the areas the company has employees. Failure to do so may lead to monetary damages and statutory penalties. With marijuana legalization increasing rapidly, and the rise of opioid addiction, state and local laws are changing.

The policy needs to be clear on what the consequences are if an employee refuses to test, is caught cheating a test, or if the results come back positive. Knowing these consequences can help deter the inappropriate use of drugs and alcohol in the workplace.

CleanFleet Can Develop and Review Your Drug and Alcohol Policy

There are 0 comment. on "How to avoid a workplace drug test result of a false positive or a false negative"