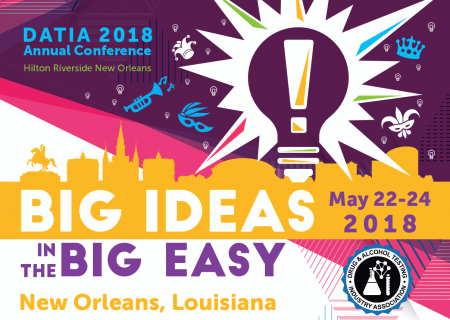 CleanFleet is dedicated to keeping our clients and staff up-to-date on the latest in the Drug & Alcohol Testing industry and one way we do this is by attending the national DATIA annual conference. This year the three day Drug and Alcohol Testing Industry Association (DATIA) conference “Big Ideas in the Big Easy” was held in New Orleans from May 22nd to 24th.

Here are five things we learned:

There is a lot of change happening in the drug testing industry, from regulatory changes to a push for more efficient electronic processes.

To read in detail about many of these changes, check out CleanFleet’s blog.

In Oregon last year, a Multnomah County judge allowed Army veteran Jaime Shupe to legally identify as neither male nor female, a first in the U.S. The ruling required the Oregon DMV to find a solution for a court ordered gender neutral classification as an administrative change.

Oregon DMV’s solution allows Oregonians to “opt out” of providing a specific gender on the driver’s license and using an “X” to signify this gender “option”. However, these change bring up many questions for businesses.

A representative at the Office of Drug & Alcohol Policy & Compliance (ODAPC) told us that there is no talk of ODAPC level regulations coming down from the current administration on gender neutral regulations.

ODAPC’s “unofficial” recommendation for collection facilities is to follow TSA rules in gender neutral situation or rely on the gender as expressed by the employee being tested. If a “Gender X” person expresses them-self as a female, then they get patted down by a female TSA agent.

However, Legacy Health Systems has instructed collection sites that “it was determined that we are going to go by Anatomy when this issue comes up” for their non-federal testing for observed collection, like Department of Human Services drug testing.

We are still waiting for an official recommendation from ODAPC.

3. Non-federal drug testing regulations are all over the board state-by-state

As we have seen over the years, drug laws and standards are changing, and states are no longer uniform in their existing drug laws or drug testing requirements or restrictions.

Some states and cities restrict types of testing circumstances (like Random testing) and specimens permitted in a drug test. Other states have strict requirements for notifying employees of positive test results, as well as the disciplinary consequences that may be imposed for testing positive.

Furthermore, some states do not have drug testing regulations, while others offer workers’ compensation premium discounts.

A word of caution, it is critical for employers to become familiar with the state and local testing laws applicable to their workforce. Just because you may not be aware of a rule, you or your company must still follow them. You can’t say “I didn’t know” and get away with non-compliance. Whether you are starting a testing program from scratch or updating an existing program, keeping up-to-date on state laws is essential. CleanFleet can help look over your policy.

In 2017, positive tests for illicit drugs in the American workforce remained at their highest level in more than a decade, according to the annual Drug Testing Index from lab services provider Quest Diagnostics.

“It’s unfortunate that we mark 30 years of the Drug-Free Workplace Act with clear evidence that drugs continue to invade the country’s workplaces,” Barry Sample, senior director of science and technology at Quest Diagnostics, said in the release. “Not only have declines appeared to have bottomed out, but also in some drug classes and areas of the country drug positivity rates are increasing. These changing patterns and geographical variations may challenge the ability of employers to anticipate the ‘drug of choice’ for their workforce or where to best focus their drug prevention efforts to ensure a safe and healthy work environment.”

5. Educating employers on the drug testing industry is critical

As we have discussed above, there are a lot of changes happening in this industry. CleanFleet is staying on top of these changes and you can expect more in-depth articles on many of these regulatory, political, and industry changes, as well as other educational resources.

CleanFleet also provides management training, including our Reasonable Suspicion Training (RST) that covers the physical, behavioral, speech, and performance indicators of probable alcohol misuse and use of controlled substances and how to handle the RST process.

We want to give you the power to make educated decisions and we look forward to working alongside you throughout the years to come. If you are not already a member, you can become one by calling us at 503-479-6082. Be sure to join our newsletter as well to stay updated on industry news.

There are 0 comment. on "5 Things CleanFleet Learned at National Drug Testing Industry Conference"