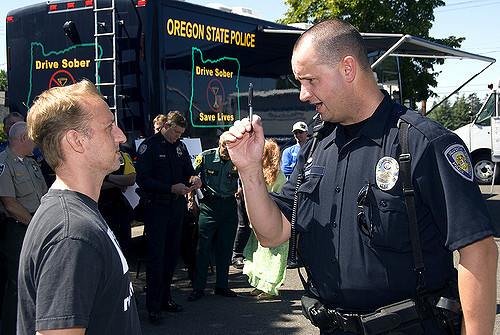 Police officers in Michigan are taking their initial roadside oral saliva drug testing program even further around fall of 2019. The state is vetting the prospect of a five-minute roadside test police officers can use when drugged driving is suspected.

The idea is to have a field test for drugs, similar to a portable breath test that detects alcohol in a driver’s system, to help police establish probable cause. This study is being carefully watched by other states and California has started doing their own roadside studies.

But why is it so hard to measure if someone is high or not at roadside?

Before we answer this question, let’s take a look at the state of marijuana today and how it affects the body when it comes to driving.

In 2019, 31 states have legalized medical marijuana and 10 states for recreational marijuana. While states have made these changes, the federal government still considers the production, sale, possession and use of marijuana a criminal activity.

While it may be legal to consume marijuana, operating a vehicle on public roads while impaired is a criminal offense. This is due to the intoxicating effects of THC, a component of marijuana that makes you feel high.

Issues associated with marijuana impairment and driving, according to the American Transportation Research Institute, include:

A 2016 analysis of research on the crash risk associated with marijuana intoxication found an increase in crash risk of 20 to 30 percent. A 2017 study found that drivers testing positive for marijuana (THC blood content of more than 1 ng/mL) were 65 percent more likely to have a role in causing a fatal crash.

The previous one-year pilot program was tested in five Michigan counties and ended in November.

According to pilot program director 1st Lt. Jim Flegel of the Michigan State Police, the accuracy of a roadside saliva test showed great promise and said results from the roadside test units “correlated very well” with secondary analyses to double-check results, but that more testing of the units needs to be done.

During the first pilot study, a total of 92 roadside saliva tests were conducted in five counties around the state on suspected drug-impaired drivers.

Some drug categories, such as opiates and methamphetamines, were underrepresented in the initial pilot and is one reason police want a second broader study. The analysis of the initial pilot was positive but expanding the test state-wide will allow more reliable data.

Officers who can participate have to be drug recognition experts who have received special training to recognize drug impairment in order to handle the roadside tests. There may be around 140 officers that must have a reason to suspect drug impairment to use the test.

“Proof of Impairment” with Marijuana Testing

To answer why it so hard to measure if someone is high or not at roadside, we need to discuss what drug testing techniques can actually do.

Standard drug testing techniques today can easily identify past marijuana use by measuring metabolites (the by-product compounds which do not correspond with impairment levels). A positive test for past marijuana use can lead to employee termination by many employers, particularly those with strict anti-drug policies or those who employ safety-sensitive transportation workers.

But testing is not evidence of active impairment or intoxication. Thus, a simple blood or breathalyzer test being used by law enforcement for suspected alcohol impairment is not ideal for identifying drivers operating under the influence of marijuana.

Of the states that have legalized recreational marijuana, most have chosen to set limits on the amount of acceptable THC in blood tests when testing for driver impairment. However, the National Highway Transportation Safety Administration (NHTSA) offers evidence that some state laws allow an individual to be charged with a DUI if they test positive for THC derivatives in urine following arrest, which indicates marijuana use in the past 30 days but not necessarily recent marijuana use.

Measuring marijuana impairment is difficult for the following reasons:

As we wait for new technology and additional research….

Until there is a better way to measure intoxication at roadside and states standardizing what levels of THC in the system is acceptable, all police need to be trained as Drug Recognition Experts who are specially trained law enforcement officers certified in recognizing and assessing individuals who are under the influence of drugs and/or alcohol.

Remember, some state laws allow an individual to be charged with a DUI if they test positive for THC derivatives in urine following arrest, which indicates marijuana use in the past 30 days but not necessarily recent marijuana use.

Be aware of what your state laws are and be careful on the road.

There are 0 comment. on "Understanding Why Michigan Police are Expanding Roadside Marijuana Testing Study in 2019"