At ATA’s annual Management Conference and Exhibition in San Diego last week, they announced to bolster their existing impaired driving policies to deal with marijuana in a national environment trending for legalized recreational marijuana.

Their existing policies included calling on the government to:

The new set of policies will now include:

According to ATA’s president, “This policy allows us to, while recognizing that the modern world is changing, advocate for strong, safety-oriented policies backed by sound science and data.”

Research into marijuana’s impact on impairment is paramount in understanding how the drug truly affects the body. Cannabis has different effects than alcohol and marijuana impairment lingers longer than intoxication.

The biggest issue the needs to be answered is how to prove impairment while a driver is actually behind the wheel. Is there a simple standard, like with alcohol impairment (you are either drunk or sober), that can scientifically “prove” a person is high while behind the wheel?

Dr. Todd Simo, chief medical officer for HireRight, an employee background screening service, said at ATA’s conference that the marijuana lobby has done a good job making the point that alcohol and marijuana are either the same or pot is better for you than alcohol. “From an occupational impairment perspective, marijuana is much worse than alcohol.”

While it’s obvious that drivers need to be tested, it’s more complicated for other fleet employees. These fleets crafts drug testing policies for their nonregulated workforce. Those policies have to detail the consequences when an employee tests positive for medical marijuana because many states have specific protections for medical marijuana users.

As we wait and see what the government will do regarding marijuana research, national positive result database, or oral saliva testing and impairment standards, companies need to make sure their drug and alcohol policies are updated to meet state requirements where medical or recreational marijuana has been legalized.

A company’s drug and alcohol policy should be fair and reasonable, clearly stated, fully explained and understood across the company, and compliant with local, state, and federal law in the areas the company has employees. 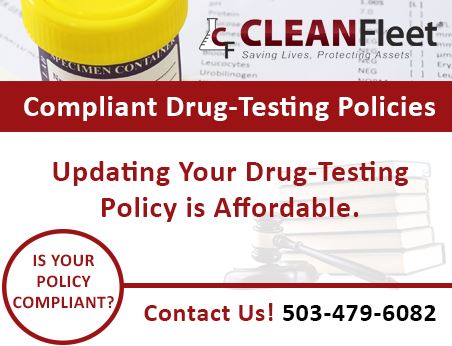 There are 0 comment. on "American Trucking Association Calls For More Research Into Marijuana’s Impact On Impairment"