The purpose of the FMCSA CDL Clearinghouse is to close drug testing violation loopholes by storing violations in a central location and requiring employers to check for these records before handing over the keys.

Before the Clearinghouse, drivers who have tested positive or refused to test for one employer will go to work for another employer without disclosing the violation or completing the return-to-duty process.

This loophole has been closed since the launch of the Clearinghouse on Jan 6th, 2020.

However, there is another loophole being closed starting April 1st, 2020.

According to the Commercial Vehicle Safety Alliance, starting April 1, drivers who are prohibited from driving, per the CDL Clearinghouse, will immediately be put out-of-service by CVSA roadside enforcement inspectors. These drivers will not be allowed to leave the scales driving a CMV, and employers will have to arrange for another driver to pick up the load.

Who Would This Affect At Roadside?

For Owner Operators or drivers that work for multiple companies, one company will catch the drug testing violation and prevent the driver from operating with them until SAP process is completed.

However, the other companies the driver works for do not know of the recent violation and the driver can illegally drive until caught if a detailed audit is performed or an annual query is performed.

Last week, the DOT said more than 8,000 records have been added to its CDL Drug and Alcohol Clearinghouse since is was launched on Jan. 6. This means more than 8,000 CDL holders have failed or refused a drug test (or committed an alcohol violation) as part of a pre-employment screening, random drug test or post-accident test in the last seven weeks.

For example, if a driver who holds a driving job, then applies to drive for another fleet and is turned away for failing a pre-employment drug test, they could still retain employment without their current fleet knowing. Such drivers could remain employed and driving until their fleet runs the required annual query of the Clearinghouse.

Now, this process can be caught if a driver is pulled in at roadside, likely with a Level 1 inspection. If roadside finds a violation found in the Clearinghouse that notates “Driver is prohibited from operating”, the driver will be placed out-of-service.

This will cause delays in shipping, lost loads, and often more companies needing to fly drivers to finish a load at roadside due to Clearinghouse catching drivers who are working for multiple companies.

According to CVSA’s new inspection guidance, roadside personnel must verify a driver’s status based on the clearinghouse data when stopping drivers with a CDL or CLP for a driver/vehicle examination or roadside inspection. They do not specify at which level or levels of examination will trigger this Clearinghouse verification, but likely as low as a Level 1 inspection.

Roadside personnel may access “Query Central” (QC) at the driver level by entering the driver’s CDL information. QC will check the driver’s eligibility status and return the results in the box on the upper right, as seen below. 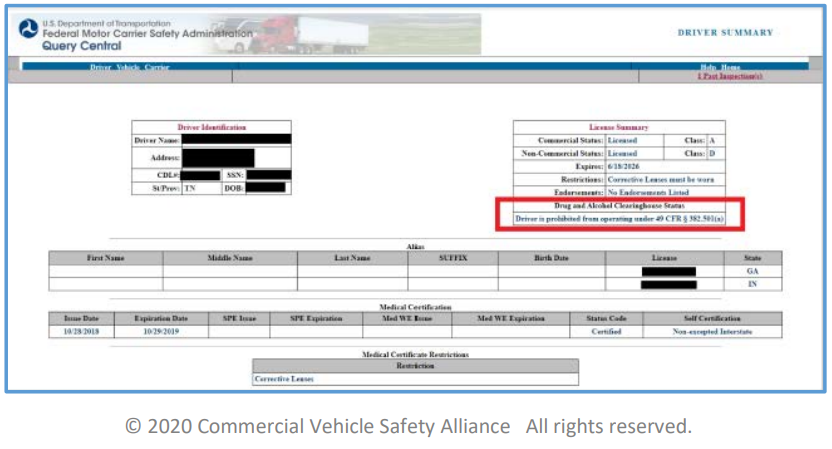 Alternatively, roadside personnel may access the Commercial Driver’s License Information System (CDLIS) gateway (cdlis.dot.gov) at the driver level. The inspector will enter the driver’s CDL information and the results will reflect the driver’s eligibility status under the history search.

A driver found to be operating in a prohibited status should be cited for a violation of 49 CFR Part 390.3 – Prohibited from performing safety-sensitive functions per 382.501(a) in the Drug and Alcohol Clearinghouse.

On and after April 1, 2020, this violation will be an out-of-service condition in the Commercial Motor Vehicle Safety Alliance North American Standard Out-of-Service Criteria and the driver will be placed out of service if found in a prohibited status.

The rules haven’t changed. Using a driver who has violated Part 40 has always been an out-of-service violation. Roadside just now has the Clearinghouse as a tool to check.

There are 0 comment. on "FMCSA Drug Testing Clearinghouse Will Catch Even More Drivers With Violations At Roadside"